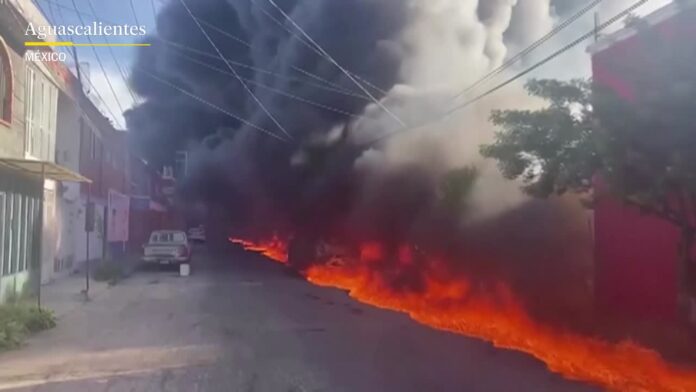 A huge blaze has engulfed a train line and homes in Aguascalientes, central Mexico, after a fuel truck crash.

Dramatic video of the fire went viral on social media, including aerial shots of black smoke blanketing a large area of the city. One video showed a cargo train hurtling through flames.

Mexico’s El Universal website says more than 1,500 people were evacuated. Some homes and cars were gutted by fire.

There are no reports of deaths, but several people were taken to the hospital.

Police have detained the truck driver.

A Facebook post by Mayor Leo Montañez speaks of 300 homes in the crash area, 120 of which have been damaged.

It is not clear exactly how the crash happened. Initial reports said the truck had collided with a train, but the Reuters news agency now says the truck hit an overpass.

State oil firm Pemex has denied owning the truck and says it is helping efforts to contain the fire.

Some 200 firefighters are trying to contain the blaze, El Universal reports.

One video shot from a car parked nearby showed a long cargo train passing through flames on both sides of the track.