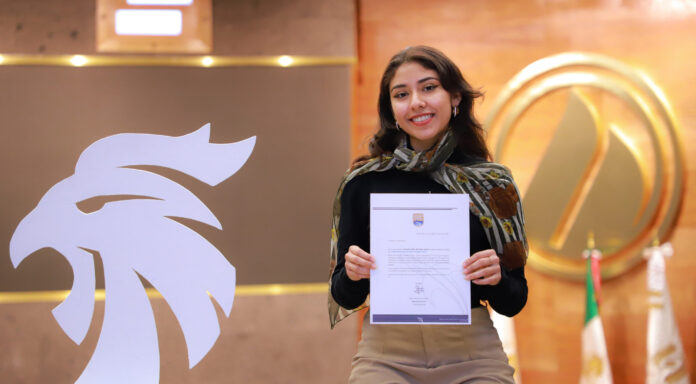 The student managed to be accepted into the International Air and Space Program (IASP) in its 2022 edition, a rigorous educational program aimed at university students from all over the world interested in aerospace issues.

Vanessa Isabel Arellano Serna, a sixth-semester student of Intelligent Computing Engineering at the Autonomous University of Aguascalientes (UAA), will fulfill her dream of being part of the most important space agency in the world: NASA.

The foregoing, due to the fact that it managed to be accepted into the International Air and Space Program (IASP) in its 2022 edition, is a rigorous educational program aimed at university students from all over the world interested in aerospace issues.

The 20-year-old university student announced that the program, to be held in November, consists of a five-day stay at the NASA facilities located in Huntsville, Alabama, United States, during which time Together with 60 other accepted students from various countries around the world, the IASP authorities will divide them into multidisciplinary teams so that they can solve any problem that could arise in real space missions, from highly complex flight tests or related experiments to support the investigation of the POT.

The IASP is a program designed to carry out research and development of advanced aeronautical technology. It focuses on the rigorous execution of highly complex flight tests and related experiments to support all phases of NASA’s research in this field.

“We will be working under the coordination of the NASA Engineers themselves and we will seek to respond to an aerospace problem that they will present to us until we are in Huntsville; During these previous months, we will be given an online training with some topics that will help us solve the problems presented. At the same time we will have astronaut training and our own flight suit. I’m so excited, I can’t believe it.”

She explained that, like many children, since she was a child she dreamed of traveling to NASA or learning about space, but it was until she arrived at the UAA that she strengthened her interest in it by learning about areas of programming that can be related to computational astrophysics. , a field in which you want to specialize upon graduation.

Likewise, she highlighted that thanks to the impulse she has had from her university teachers to participate in local, national, and international competitions related to her career to strengthen her knowledge as a future professional, she decided to register for the International Air and Space Program, a program that, although it is very difficult to enter, the UAA student managed to be accepted.

“When I started studying at the UAA I learned about topics that I did not imagine could be related to astronomy or astrophysics. My teachers in the career have also been a great support, they motivate us a lot to get involved in calls in which we can challenge our knowledge with students from other parts of the republic and now the world; in being sure of everything we can achieve if we set our minds to it”, he pointed out.

The student invited the population to join her scientific dissemination project on social networks (@cafeystem), an initiative that seeks to promote science and technology mainly to the new generations in an innovative and friendly way for their interest.

He also thanked the UAA for having given him their support around a percentage of the financing he required to travel to Alabama, United States, to be part of this important international project.