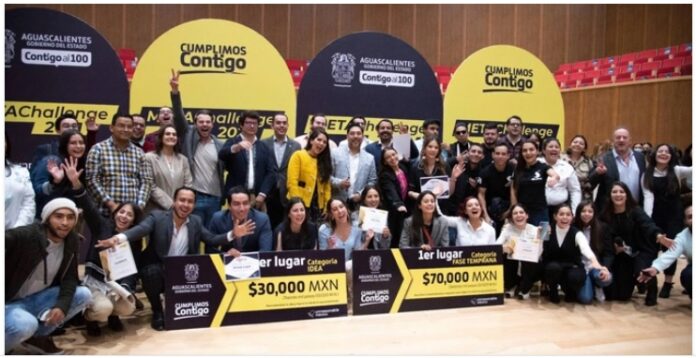 The winners of the Metachallenge 2021, who surprised with their projects and the impact they are achieving in their municipalities, won prizes of 100,000 pesos in cash and 100,000 pesos in incubation services.

After three months of calling and an intense process of selection, training, and awards, the Metachallenge 2021 came to an end. It is an initiative co-created by Unreasonable Mexico and the Secretariat of Economic Development (SEDEC) of the Government of Aguascalientes, whose objective is to promote the entrepreneurial ecosystem in the state.

The event is a strategy to celebrate innovation and recognize entrepreneurs who with their projects are contributing every day to solve the most urgent social problems in Aguascalientes.

After the call, the Unreasonable Mexico and SEDEC team undertook the task of looking for the ventures with the greatest potential, and that was how 10 projects were chosen in the idea stage and 10 in the early stage. The selected male and female entrepreneurs took intensive virtual training where they learned effective communication methodologies, rapid prototyping, market understanding and business models.

The last stage of the Metachallenge culminated in the grand finale that took place on November 25, 2021, in the Aguascalientes Concert Hall, which was broadcast on state radio and television, as well as on digital platforms and social networks.

The people with the 10 best projects arrived at the grand finale, who presented their pitch to a jury made up of personalities from the entrepreneurial ecosystem in Mexico, including Manuel González, Secretary of Economic Development of the Aguascalientes government, Marcus Dantus, founder and CEO of Startup México, Raúl de Anda, co-founder and CEO of Unreasonable México, Gabriela Estrada co-founder of Vexi Card, and Jennifer Reyna co-founder of Okboy.

In the idea stage category, the winners were Manuel Alejandro Paz Luévano and José Carlos Hernández Robledo, from the municipality of Aguascalientes. His project, Kalmmus, is about the production of recycled pet pallets with vegetable fibers, thus minimizing the environmental impact generated by the use of wood in this product and maximizing its time of use.

In the early stage category, the winners were Maria Jóse Blanco Arellano and Ana Luz Blanco Arellano, from the municipality of Jesús María. His startup, Chela y Lucha, is a line of high-quality clothing, bags, and accessories made from scraps of leather. With their project, Chela and Lucha are creating a unique piece in each product while reducing the waste of the 150 thousand tons of leather generated by different industries.

The winners of the Metachallenge 2021, who surprised with their projects and the impact they are achieving in their municipalities, won prizes of 100,000 pesos in cash and 100,000 pesos in incubation services.