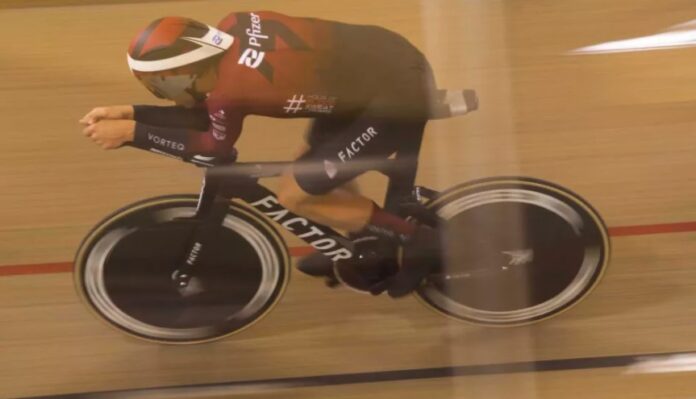 Alex Dowsett has fallen short of setting a new UCI World Hour Record at the Aguascalientes Velodrome in Mexico.

Dowsett has held the Hour Record previously, having set a new distance in May 2015 in Manchester before Bradley Wiggins beat his distance just a month later.

The 33-year-old set off on his record attempt at 16.00 local time in Aguascalientes, which sits at almost 1900m in altitude.

In the first 10 laps Dowsett was riding up on the time of Campenaerts’s record, but his time in front of the Belgian was short-lived.

With around 20 minutes of the effort gone Dowsett had dropped to around three seconds behind the record, having completed 18.250km.

While he sustained that gap for a time, by halfway the cracks were beginning to show as the time slipped to four seconds and continued to go up.

With 40 minutes gone it was really not looking good for the former British time trial champion, who looked to be struggling as the gap escalated to over seven seconds.

He was still riding at over 54.8 km/h with 46 minutes ride, but at well over 12 seconds down the record looked to be gone.

That was all but confirmed when at 52 minutes in Dowsett sat up from the skis on his bars due to discomfort, before settling back in and battling on with his effort despite being at 21 seconds behind the Hour Record.

Dowsett continued on to complete the Hour Record attempt but fell short by over 500m, or two laps of the velodrome. He also missed out on Dan Bigham’s British record of 54.723km, which was set in Grenchen, Switzerland in October.

“The biggest failure today would have been to have never tried and that’s the message I want to send out,” Dowsett, who rode the record to raise awareness and money for hemophilia charities, said after the finish.

“[I] came up short. And I just want to take it to say another well done to Victor [Campenaerts] and to Dan Bigham because there was a British record up for grabs today and I was a bit shy. Hats off to both of them are both incredible athletes.”