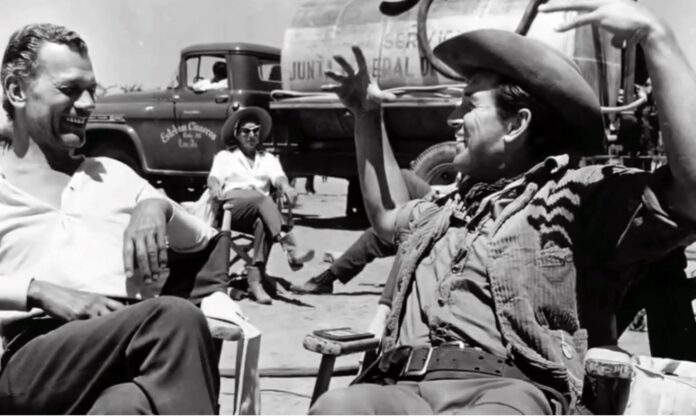 By Alejandro Basáñez Loyola, author of the historical novels: México en llamas; Torn Mexico; Cristero Mexico; Tiaztlán, the end of the Aztec Empire; Santa Anna and the lost Mexico; Ayatli, the Chichimeca rebellion; Juárez before the Church and the Empire. Facebook @alejandrobasanezloyola

60 years ago, in the summer of 1960, Venadero, ejido of Ignacio Zaragoza, next to the Hill of the Dead, was dressed for filming westerns of director Robert Aldrich, The Last Sunset ( The Last Sunset ), based in Howard Rigsby’s novel Sundown at Crazy Horse, was adapted by screenwriter Dalton Trumbo.

In a few weeks, the little town of Zaragoza was transformed into an authentic cowboy town to bring the most beautiful landscapes of Picacho and its surroundings to the big screen in Hollywood.

The always peaceful capital of the state was altered by the arrival of an entire film crew from Hollywood, the mecca of world cinema. The actors and film crew stayed at hotels near San Marcos, and several downtown businesses benefited from the sale of shoes, clothing, car rentals, trucks, souvenirs, and supplies necessary for the filming.

It was commented in the newspapers that the filming of The Day of the Revolver would soon begin, then no, that it would always be called El Ojo Caliente del Cielo, until it was finally known as The Last Sunset.

The film needed several locations around Aguascalientes and Jalisco, but the majority took place in El Venadero, in the municipality of Jesús María. On the edge of El Venadero, near some tubular horse tracks, are the remains of what was an aqueduct that was specially built for the film.

Today there are only a few columns of adobe and stone that little by little the wind, rain, and the curious have been erasing with the inclement passage of time. The construction of the aqueduct alone took a whole month. From the aqueduct, you can see majestic, at most one kilometer, the San Miguel de Venadero farm.

Many people came to the call in the newspapers to participate in the film, either as extras or assisting in the construction of the set, loading the film equipment, opening gaps, cooking, sewing clothes, and so on.

The pay was very good and the opportunity was unique. There are still people who at that time were little boys, who proudly say that they were Indians, settlers and cowboys on the set. The beauty of the young Carole Lynley, who falls madly in love with the forty-year-old Kirk Douglas, captivated the locals, as she liked to sunbathe in a bikini, to the amazement of the locals who peered in amazement behind houses, cactus plants, and rocks.

It is important to note that in that Mexico in the sixties, a woman in a bikini caused the anger of the ladies and the approval of the gentlemen, and much more, in provincial towns such as Palmillas and El Venadero.

Carole Lynley is also remembered as the beautiful 30-year-old actress from the film The Poseidon Adventure (1972). In The Last Sunset, there is a memorable scene in which the girl rides swiftly through a sandstorm, and two daring riders try to gallop her from the haunches of her horse to theirs.

The sandstorm was caused with special fans and seen as a memorable and dangerous scene by many locals, who in fewer numbers, due to the passage of time, as the afternoons fell on the Picacho and in the background its multicolored tones, talk of this in comfortable chairs outside their houses.

Another recording site was at the foot of Picacho, in Los Tecongos or Mesa de la Carreta. There, another dangerous scene was filmed that required 200 Yaqui Indians who were starred by the extras who attended the place. The offer was tempting since they paid 75 pesos per day.

Today, on one of the gigantic rocks, there are wheels of a cart that is not the original of the film, but that are there to remember that the battle against the Indians was filmed there. The original wagon is said to have been purchased by a Calvillo dealer and brought to Oklahoma.

Another interesting recording site was in Milpillas de Arriba, another municipality in Jesús María, ten kilometers west towards Calvillo. There the swamp scene was filmed, and the community was so small and unpopulated at the time, it took almost the entire town to film it. In this scene, Rock Hudson is trapped in a swamp and manages to get out of a miracle. The delicate actor refused to get dirty and had to be bent over by a local to get the horse out of the quagmire.

The revolutionary villista Rodolfo Fierro, the famous “Butcher”, in real life did not have that luck and he sank with everything and horse in one of the lagoons of Nuevo Casas Grandes. There was so much gold that he carried that there was no way to get it out.

Another location that had to be specially built is the “Casa del Bandido”, whose location among ruins is very difficult to locate. The house was used as the ranch house in the film and was located in the Mesa del Contadero, next to where today there is a communications antenna, like the ones that crown the Picacho.

A curious fact is that the workers who put in a machine to build the house are believed to have found gold since that same afternoon they disappeared without hearing from them again.

There is a memorable scene where Douglas arrives whistling happily at the ranch, and behind the distinctive surrounding hills of the region are contemplated. In another scene, Joseph Cotten (1905-1995), arriving at the ranch also by that same road, boasts in the version dubbed into Spanish that he had sold his ranch in Calvillo to buy 300 acres in California.

This June marks six decades of that memorable event and we should feel honored that Hollywood, surrounded by thousands of places to film this movie, has chosen Aguascalientes to shoot it.

The garden of San Marcos was a silent witness to the presence of the legendary “Spartacus” and once “Vincent van Gogh”, who would surpass all his fellow actors by being the last to die, 60 years later, a year after his love Carole.