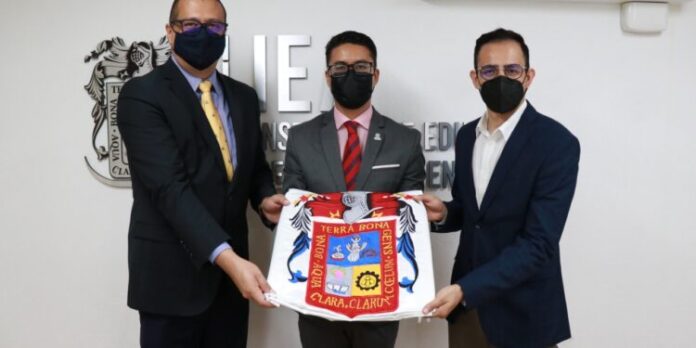 The students of the Artificial Intelligence career will face more than 1,300 students from universities such as Harvard, Oxford, Massachusetts Institute of Technology (MIT), Yale, among others.

Efrén González, Manuel Rodríguez, and Gustavo Meza, students of the Artificial Intelligence career at the Universidad Panamericana Aguascalientes campus, will represent Mexico in the final of the International University Programming Competition (ICPC) 2021 in its 44th edition, which will take place in the city of Moscow, Russia, where they will face more than 1,300 students from universities such as Harvard, Oxford, Massachusetts Institute of Technology (MIT), Yale, among others.

The general director of the Aguascalientes Education Institute (IEA), Ulises Reyes Esparza, was in charge of flagging the contingent that is about to travel to that country.

During the event, he pointed out that the state is proud to have outstanding and competitive students, in addition to recognizing the efforts of young people, who were selected from among more than 50 thousand students from around the world.

Aguascalientes is among the best 130 universities in the world, with the careers of the future focused on science, data, programming and technology; It is precisely what we are promoting, to diversify the educational offer but also to be relevant to the demand of companies that are producing knowledge, software and technology. We wish the students every success ”, he stressed.

For his part, Juan Carlos García Sánchez, director of Engineering at the Universidad Panamericana, pointed out that the ICPC is an algorithmic programming contest for university students, who during the competition work in teams to develop advanced software in the shortest time.