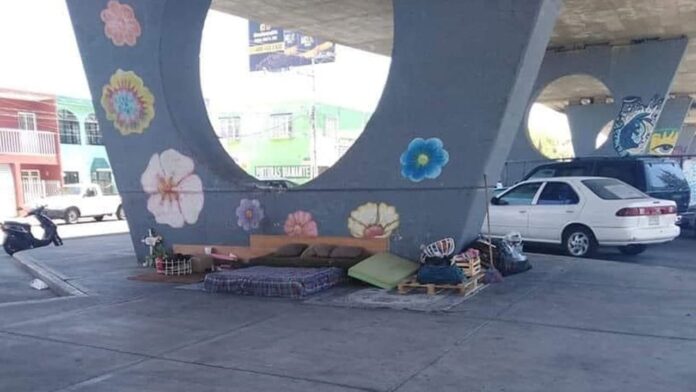 The bedroom under a bridge of a homeless person, in Aguascalientes, went viral. The reason? The order and cleanliness that can be seen in the photo.

The photo shows that the space under the bridge was adapted as a room by a homeless or destitute person. It is appreciated that there is even a piece of carpet or rug, along with a bed, boxes, and cleaning supplies such as a broom.

The image, which was uploaded to the Soy Chilango Facebook page, was accompanied by the following sentence: “As my grandmother used to say: ‘one thing is to be poor and quite another is to be a pig’. Thus the bedroom of a homeless man in Aguascalientes. “

The neatness with which this homeless person maintains the space made the photo soon go viral on social networks (Image: Facebook / Soy Chilango)

“As my grandmother used to say ‘one thing is to be poor and quite another is to be filthy’. Thus the bedroom of a homeless person in Aguascalientes ”, says the Facebook post.

Some netizens took the event with grace, while others wrote positive comments regarding the bedroom.

“It even looks pretty. May God give him the blessing of a job and a house ”; “Surprising the education of others. Good for the people, the people of Aguascalientes, the net ”; “Lives better and is cleaner than many”; “Great, I hope you follow his example, thank you for sharing”; are some of the comments.

The comments were of all kinds, from those who applauded that the homeless person could keep the space in such good condition and those who assured that this person was an example since they “lives better and is cleaner” than others.

According to the National Institute of Statistics and Geography (Inegi), in Mexico there are 5,778 homeless people. The three states with the most indigence are Mexico City, Baja California and Jalisco.

In Mexico, there are 5,778 homeless people, according to Inegi (Image: Cuartoscuro)

Inegi clarified that it was difficult to register these people since access to them is difficult. They also reported that a “considerable number” suffer from their mental faculties, either due to health problems or drug use.