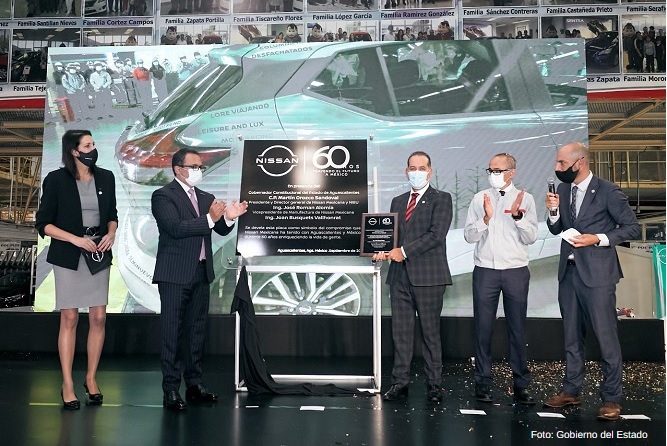 60 years after Nissan’s arrival in Mexico, its permanence in the country and in Aguascalientes is the result of a single formula: an excellent company, a state that puts all the necessary conditions for its development and, above all, qualified labor that makes the success in the manufacture of the products.

This was stated by the state governor, Martín Orozco Sandoval. During the commemoration of the 60th anniversary of the Japanese company, the state president recognized those who with a great spirit of dedication, commitment and teamwork have built what is now a tradition in Aguascalientes, a strong automotive sector, with great trajectory and success. uninterrupted.

“The success of Nissan in Aguascalientes is not strange, because we live under a climate of unequaled job stability, we have more than 50 years without a single strike, a result of the quality of our working people, as well as the work of employers and managers ”, Assured the governor.

During this event in which a commemorative plaque was unveiled for the 60th anniversary of this corporation, Martín Orozco strengthened the commitment of his government to continue preserving the conditions of public safety, social and labor peace, modern and quality education, the diversification of investments, infrastructure and mobility, so that Nissan and other companies continue to trust and invest in Aguascalientes.

The president called on the more than eight thousand employees of Nissan in the entity to continue working so that the tranquility and job stability continue as before in Aguascalientes; and finally, he thanked the managers for generating sources of employment and raising the quality of life of the families.

At the time, José Román, president and director of the company in the country confirmed the arrival of Nissan e-POWER in Mexico for the second half of 2022, technology that integrates fully electric motors and without the need for special electric chargers.

For his part, Joan Busquets Vallhonrat, Vice President of Manufacturing at Nissan Mexicana, highlighted some of the achievements that have made Aguascalientes competitive internationally. Among them, he mentioned Nissan University, a successful project from which 100 people have graduated with official degrees and which is recognized as the first corporate university in the automotive sector endorsed by the SEP.