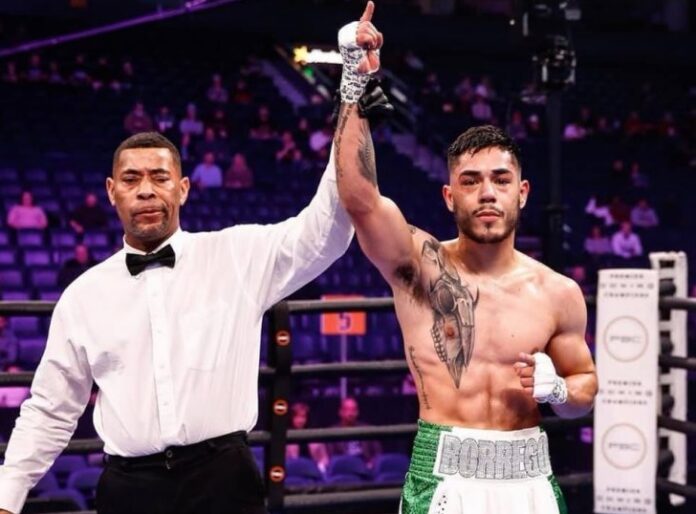 The boxing evening to be held on Wednesday, September 15 at the Palenque de Gallos of the San Marcos National Fair was officially presented, where the stellar duel will be starred by the local idol José Miguel Borrego and the Tamaulipas Carlos “Rana” Gorham, by vacancy Fedecaribe WBA welterweight belt.

On the same card it was announced that the former WBC universal lightweight champion, the Argentine Erica “Pantera” Farías will raffle the physical with the Nayarit Marisol “Coronita” Corona, ten episodes away for the vacant international super featherweight title of the same World Boxing Association.

At a media conference, where Dr. Manuel Aceves Rubio, General Director of the Aguascalientes State Sports Institute (IDEA) and the Director of Sports, Gonzalo Villalobos met; Jorge López, Secretary of Tourism and president of the Board of Trustees of the San Marcos National Fair; and Gerardo Saldívar from Golden Ring, was informed of the details of the boxing event and future projects.

Jorge López reported that the State Government reaffirmed its support for holding large-scale sporting events, including boxing. He also estimated that the Aguascalientes Wine Route, leaves an economic spill of 16 million pesos, and that the hydro-warm State is positioned as the third national tourist center, without a beach, with a rise of six percent, compared to 2 percent of the national average.

Likewise, regarding the sport of fists, he stressed that there is a commitment for all those young people who practice the noble discipline, whether in the amateur or professional field. That is why the Mexico Warriors Belt will be one of their first goals for the new generations of boxers in the region and thus demonstrate their quality in the ring.

Another of the points that was touched was that of the boxer Miguel Borrego, who is being promoted so that he can contest the world title in his land and perform an international function that is important for the State and at the national level. . Therefore, it is expected to position Aguascalientes as the capital of boxing in Mexican territory with quality events through TV, and show the benefits of the State, having the support of the State Government.

As for the function on September 15, a Mexican Party of boxing and excitement is expected. All sanitary measures will be taken and a capacity of seventy percent will be allowed in the Palenque de Gallos of the San Marcos National Fair.