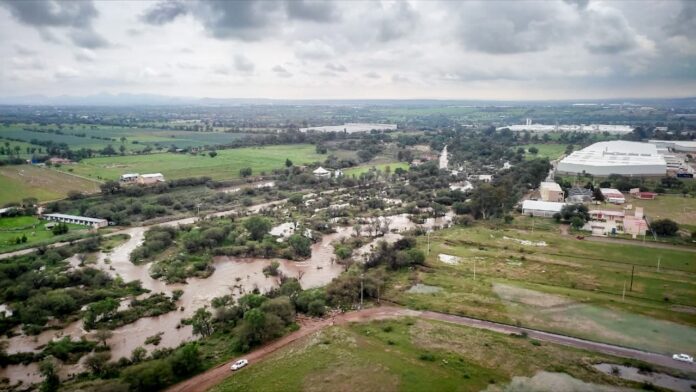 The El Cenizo community was affected after the “El Chichimeco” dam spilled water in large quantities due to the rain this morning.

Elements of the State Coordination of Civil Protection, State Police, Municipal Civil Protection of Jesús María and State Firefighters, carry out support and rescue work for the El Cenizo community, which was affected after the “El Chichimeco” dam spilled water in great quantity due to the rain this morning and the runoff from a part of the Sierra Fría.

The head of the agency, Héctor Reyes Hernández, said that they immediately evacuated the homes of the aforementioned community, adding that at this time the water level affecting the community began to drop.

He added that the immediate closure of state highway number 18 was carried out, for which 20 people were evacuated, five houses located on the entrance street to the community, as well as those closest to the body of water. At the moment, only two houses have a flood of around 25 centimeters.

For its part, the State DIF has activated the temporary shelter in the municipality of Jesús María, which is ready to receive and offer hot food for evacuated people, with the support of Civil Protection for transfers to said shelter, in addition to They fitted out three classrooms at the San Antonio de los Horcones school as temporary shelter.

The State Coordination of Civil Protection will remain in place for the next few hours to monitor the dam that continues to pour water, and urges the population to remain attentive to the call of the official authorities, and report any emergency to 911.