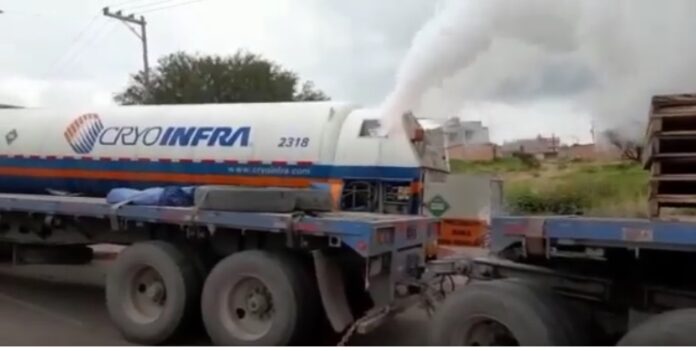 Aguascalientes State Firefighters in coordination with the Civil Protection of that Municipality and the Preventive Police, moved to Colonia La Cañada after receiving the report that a tank trailer obstructed the road and had an active nitrogen leak, so it was necessary to evacuate the inhabitants of the surroundings.

The events were recorded around 4:50 p.m. when the emergency number 911 received a report that there had been a collision between two trailers and one of them leaked a substance, without being able to establish what type of gas was, this in the crossing of the avenues Alejandro de la Cruz and Siglo XXI, the reason why the intervention of the emergency bodies was required.

Immediately firefighters of the State and Municipality of Jesús María, as well as agents of Municipal Civil Protection and Public Security, moved to the aforementioned crossing, where they confirmed the report and took on the task of controlling the leak of what they confirmed was nitrogen liquid.

After a couple of hours, they managed to control the leak, after which they began working to remove the blue Freightliner trailer, which was driven by Carlos, 56, owned by the INFRA company, who was carrying the tanker trailer. and a white Kenworth, driven by Angel, 57.