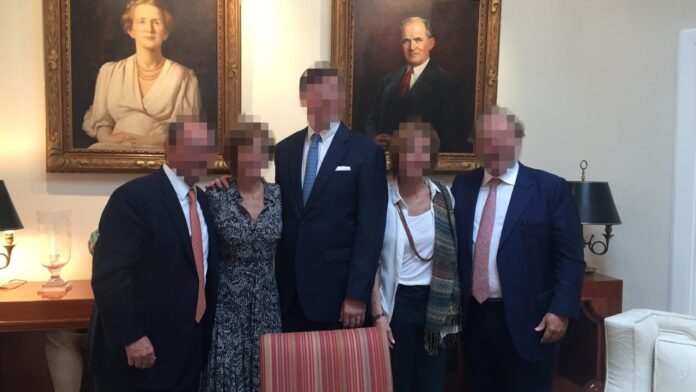 The investigation carried out by the Attorney General’s Office showed that William Oscar Jenkins constituted a Mary Street Jenkins Foundation and established that its capital would be used to carry out acts of charity or charity for the communities of Puebla.

William Oscar Jenkins arranged that at his death the Mary Street Jenkins Foundation would be the sole and universal heir, as well as established that he did not leave any inheritance or money to his children to be used.

Landa’s Jenkins family along with other people stripped the Mary Street Jenkins Foundation of an estate, which amounts to more than 14 billion pesos.

The multi-billion-dollar embezzlement was carried out through a simulated donation in favor of Fundación Bienestar de Filantropía, an institution controlled by the Jenkins de Landa family.

The Jenkins de Landa family carried out various money-laundering operations, which occurred in Puebla and Aguascalientes, as well as sent money to companies domiciled in Barbados and Panama.

Money is spent from San Diego

Guillermo Jenkins pointed out to this publishing house that although the last known of the assets of the Mary Street Jenkins Foundation is that it was in Panama, the money is handled by his brothers from San Diego, California, in the United States.

According to information revealed by ‘Paradise Papers’, Guillermo Jenkins Anstead and his heirs made anomalous movements with their resources from 1998 to 2005, using different countries for it.

This is due to the fact that financial movements were revealed that were made to Switzerland in 2004, as well as to Ecuador and the Bahamas in 2005. However, the amount that was moved between tax havens was not revealed.

As a result of the embezzlement, Landa’s Jenkins family sought to profit from the assets belonging to the Mary Street Jenkins Foundation. However, the money and assets were insured by the Attorney General’s Office.

The organization was in charge of sponsoring the refurbishment and museum equipment of the Puebla de los Ángeles room of the International Baroque Museum, inaugurated in 2016 by the then governor Rafael Moreno Valle.

Mary Street Jenkins was a student at Vanderbilt University, wife and inspiration of Guillermo Oscar Jenkins whom she married in 1901. Their home was made up of their 5 daughters and their son Guillermo Jenkins Anstead. Together with her husband, she was a promoter of various philanthropic projects, such as the nursery at the textile factory, La Corona, and the various schools and sports teams in the Atencingo agro-industrial complex. He died in 1944 in Los Angeles, California.

Guillermo Oscar Jenkins was a farmer, industrialist, financier, and philanthropist. He arrived in Mexico in 1901 and lived in Puebla until his death in 1963. Trained at Vanderbilt University, he distinguished himself as a cultured man, polyglot, and a great athlete. In honor of his wife, in 1954 he established the  Mary Street Jenkins Foundation. Seeking the welfare of his adopted homeland, he left his fortune to the Foundation.

Guillermo Jenkins Anstead was a businessman, financier, and philanthropist. He born in 1931 in Los Angeles, California, and died in Mexico City in December 2016. After graduating as an economist at Dartmouth College, received the task of joining the Board of the  Mary Street Jenkin Foundation s in 1954, a responsibility which he assumed until his death. He actively participated in the donations destined for projects of education, sports, culture, health, as well as the diverse works of social assistance.