Despite the COVID-19 pandemic hitting drug trafficking operations, the cartel led by “El Mencho” adapted and even took advantage of the situation to expand its territory

In a couple of videos with the same message, the Jalisco Nueva Generación Cartel (CJNG) announced its irruption in the state of Michoacán, a territory where cells that it promises to fight and bring alleged peace and prosperity to the population have blocked their way. .

In this way, the cartel led by Nemesio Oseguera Cervantes, El Mencho, publicized his arrival at the entity where he has been shown in front of the so-called United Cartel, which groups together cells such as Los Viagras, the Nueva Familia Michoacana and Los Blancos de Troya. The CJNG promises to exterminate these factions in order to free the people and, in particular, they target Juan José Álvarez Farías, El Abuelo.

The recording begins with a greeting from someone who calls himself a friend: “El Señor de Los Gallos or El Señor Mencho” to, supposedly, give a message of tranquility and a better future.

In the first of the clips, 13 subjects covered with their faces are observed carrying long weapons and the initials of cartel on a blanket hung behind. They occupy a table to put weapons and ammunition, in addition to the individuals carrying other heavy caliber ones, including three Barret 50 caliber rifles, a war machine gun. They all have a cap, dressed in military tactical equipment and camouflage clothing, as if it were an Army detachment.

Everyone has a cap, dressed in military tactical equipment and camouflage clothing, as if it were an Army detachment (Photo: Screenshot)

While in the second recording, with a more leisurely reading, 24 armed men appear. They are in a room that piles them up and likewise, they are shown with rifles and muffled; Behind it hangs the same blanket, on whose surface the figure of Michoacán is drawn under the four letters of the Jalisco Nueva Generación Cartel.

Whoever serves as spokesman refers that those commanded by El Mencho do not kidnap, do not steal, do not extort or kill innocent people, on the other hand, those who commit these crimes are those led by El Abuelo Farías. This last capo has operated in Michoacán since 2009, when he was listed as Los Valencia’s plaza boss; Later he was linked to the Zetas, to the same CJNG, he joined as a self-defense against the Knights Templar and has returned to illegal activities, presumably in Tepalcatepec.

“The purpose of getting into this state of Michoacán is to free the people from all those who charge a flat, fees, abuse, kidnap and kill, who are attacking the innocent people are the people of Abuelo Farías, Los Viagras, Guardia Michoacana, Los Targets of Troy, criminals that we are going to eradicate and with that we will give freedom to the people of Michoacán ”, warns the CJNG message.

Since the beginning of 2019, criminal organizations have launched threats, before and after confrontations, as a communication strategy, where they warn of casualties or justify upcoming battles, as well as the denunciation of alleged collaborations of the federal security forces with one side. or another.

In a second moment, Mencho’s letter says that they do not believe in versions that try to discredit him, since he respects politicians and the government.

” Do not believe all that news that tries to discredit me or the CJNG, since my people always have unwavering indications to respect all people, honest and hardworking people, businessmen, politicians and the government, we just we defend ourselves when they attack us, but I want to make it clear that we will soon bring peace and prosperity to this great state of Michoacán ”, adds the reader of the letter and finally says goodbye to the“ great friend, Mr. Mencho ” .

In another video that also circulated this weekend, CJNG hitmen are seen, but in Zacatecas, where they challenge the Sinaloa Cartel. A small caravan of three pick-up trucks and around 9 armed individuals with their faces covered, harangue their presence in the northern state. Hearing at full volume the song “El topón de la muerte”, composed by the CJNG, they shout in ecstasy.

The brief cylp of barely 39 seconds has in the background someone who says: “Four up, four just, here I am, I have something to love you with, you son of a bitch. “We are in Zacatecas to hell,” adds a second. 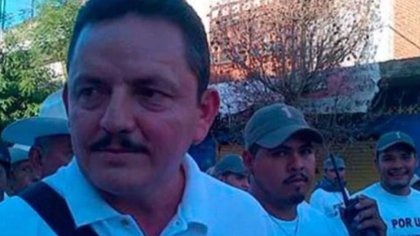 The former self-defense, Juan José Farias, has been the protagonist of different confrontations between armed civilians and the CJNG (Photo: Special)

Although the COVID-19 pandemic hit drug trafficking operations, groups such as the Jalisco Nueva Generación Cartel adapted and even took advantage of the situation to expand their territory, as the authorities would be distracted attending to the health emergency.

” Under the assumption that the security forces are engaged in activities related to the pandemic such as the surveillance of hospitals, and with a reduced capacity to intervene in shootings, ” revealed a report by the International Crisis Group (ICG).

Considered the third criminal force in the world by the United States Drug Control Administration (DEA), the CJNG dominates in 24 of 32 Mexican entities. This agency offers 10 million dollars for data that lead to the capture of Mencho.