The businessman in the real estate industry was violently deprived of his freedom in Puerto Vallarta, Jalisco

The Jalisco State Prosecutor’s Office (FEJ) confirmed that it possibly found the lifeless body of businessman José Felipe Tomé Velázquez, who was deprived of his liberty on Sunday, November 22, when he was going to his home in Puerto Vallarta.

Through a press conference, Gerardo Solís, state prosecutor, explained that thanks to a joint operation where his prosecution and that of the state of Nayarit cooperated, a lifeless body could be located that corresponds to the description of the businessman known as Lord Amparos.

“Today, Tuesday, November 25, at around 6:00 p.m. (local time), It was the authorities of the state of Nayarit who found a lifeless person at kilometer 54 of the highway that connects Peñita de Jantembal with Compostela”, Informed during the conference that he is also on the social networks of the Jalisco agency.

During his report, Solís Gómez explained that the scene is being processed. This means that the body is being lifted and the area around the corpse is being worked on, in order to find evidence that may serve in the investigation to determine both the causes of death and those responsible and apply a prompt delivery of Justice.

In this regard, he estimated that the work of collecting evidence could end in the early hours of the morning of Wednesday 25. This, to issue the first opinions and integrate them into the investigation folders that were opened in both states with access to the Pacific Ocean.

The Jalisco official explained that although the body found has the physical characteristics of the businessman, they will wait to make this finding official until they have the recognition of a relative.

“It is important to mention that of the person located, his physical features coincide with Mr. Tomé; however, it is not enough, we will wait for the official recognition by his relatives,” He said in his report. Finally, he assured that once this is corroborated, the prosecutors will make it known to the public.

What is known so far is that the businessman dedicated to the real estate industry was “picked up” in the streets of Jalisco by a group of armed civilians in the early hours of Sunday. According to the preliminary version, the victim was going home after having dinner at a restaurant in the Fluvial Vallarta subdivision. Tomé Velázquez was accompanied by four other people, who were aboard a white armored Suburban-type van. 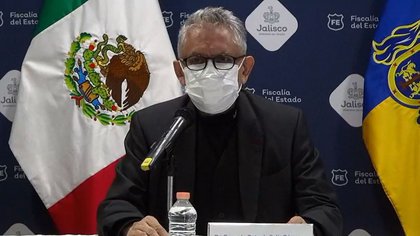 Around 2:00 a.m. (local time), when they were going to the residence located in Nuevo Vallarta, the command intercepted the vehicle when it was at the height of Las Juntas, at the exit of the city, they immediately opened fire on the suv.

At the scene of the events, they got out and killed one of the companions, who is presumed to be Lord Amparos’ driver, they wounded one of the two women who were traveling in the suv,and another man was injured by the bullets. Finally, the businessman was removed from the place and taken to an unknown destination.

José Felipe Tomé Velázquez is a businessman from the state of Guanajuato who has amassed his fortune by carrying out real estate developments that have been branded irregular in some municipalities. To be able to promote his business, Tomé Velázquez frequently resorts to legal protection, hence his nickname. In addition to this, the businessman is also related to the Bribiesca brothers, children of the former first lady Marta Sahagún.

Puerto Vallarta and the Tomé kidnapping

Again, a case of insecurity and violence puts Puerto Vallarta in the eye of a hurricane. “Vallarta is no longer the same,” lamented a local of Puerto Vallarta who recorded and uploaded to social networks the video of the attack and kidnapping of the Guanajuato businessman José Felipe Tomé Velázquez at dawn last Sunday.

This episode was added to the long list of violent events that have tarnished the image of the largest tourist destination in Jalisco, including the kidnapping of Iván Archivaldo and Jesús Alfredo Guzmán Salazar, sons of Joaquín “El Chapo” Guzmán Loera, sentenced to life for drug trafficking in the United States, which occurred on the night of August 14, 2016, in the central and luxurious restaurant “La Leche”, or more recently on July 25, when an armed group deprived of liberty almost 20 tourists from Guanajuato, in which Joaquín Miguel “N” died, and that they speak of the growing presence of criminal groups that are in constant dispute over the city and that have made extortion, the collection of business extorsion tx and kidnapping an increasingly worrying burden for this coastal town.

Although initially there was talk of kidnapping to request a ransom, due to the magnitude of the aggression the Prosecutor’s Office ruled out this motive and attributed it to possible real estate conflicts that the attacked person would be facing.

Before this incident, Tomé faced several lawsuits for alleged irregularities in his works, which he carried out not only in Jalisco but also in Querétaro, Acapulco, and Mexico City. The Plaza Galerías and Cima Park, in Zapopan, were the first to be developed here and more recently City Tower and Central Park, among others. In the developers’ union and in government circles, the main questioning that was made was that it was bypassing the municipal regulations using the discredited Administrative Court, as well as the breach of payment terms and deeds to suppliers and customers.

Due to the characteristics of the attack, one of the lines of investigation at the State Attorney General’s Office corresponds to the alleged threats that it had already received for the acquisition of land on which it was developing a project in the hotel zone of Puerto Vallarta, which it would have bought at a low price from a Jewish businessman, and in whom the local mafias had an interest. We will have to wait to see if the investigating agents confirm this hypothesis and if it is clarified or remains as yet another unsolved case to the detriment of one of the most important tourist destinations in the country.